Choices that affect the world

Life is full of choices. And choices have consequences. Take this chain of historic choices for instance in the Netherlands. The peaks in every picture are directly related. Now that our air is polluted, being number 1 cause of death in the public space, what should our next choices look like?

Goods distribution
The Netherlands choose to be the center of goods distribution for Europe ever since we discovered the waters for worldwide commerce. Our geographical positioning and trading history made the development of the large Rotterdam habor and infrastructures a logical choice.

Air pollution
Choosing to use fuel combustion as mayor source of energy for mobility, heating and movement of goods shows consequences of premature death directly related to air pollution from burning fossil fuels. A large, services economy around the consequences develops.

The pollution contibutes to global warming with the consequence of sea levels rising. Large investments are needed to protect the Dutch mainland against the sea water. If this process continues large parts of the mainland will be flooded at places where the biggest city development has taken place. How do we protect millions or even billions of people? 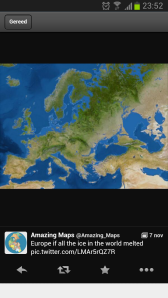 Not much of Holland will be left

When I choose to move from Spain back to Holland I noticed the equivalent reduction of quality of life due the combination of materialistic economic growth focus and growing consequences on health and environment. As a consequence my awareness developed around complex ethics and responsibilities. It became my choice to invite key local responsibilities (government, science, citizens and technology) to address People, Planet, Profit together rather than separately. Sustainocracy was born and AiREAS Eindhoven our first venture. 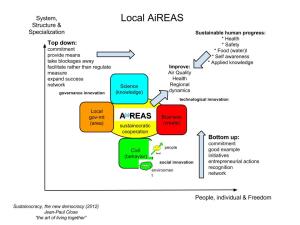 AiREAS is the first sustainocratic venture for healthy environments from a air quality point of view.

Choices are based on circumstances, opportunity and awareness. What would happen if Europe would change focus from consumption to productivity? What would happen if economic value would be given to positive human interaction rather than materials and goods? What would have happened to my awareness if I had stayed in Spain instead of moving to Holland? How can Holland cope with health responsibility when its economic positioning depends on unhealthy practice? What choices can we expect? What would happen if we did nothing?

Analysis of choices, consequences and sustainable human progress is becoming a modern science of its own. But whatever the outcome, the transformative reality is clear. If we do not work on those global issues locally with solutions fast we will be surprised by chaos and disaster. We will pay the highest price ever. Death. Now we still have a choice. 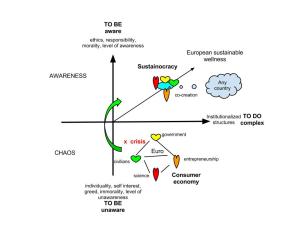 Two realities with the same players in the model (JP Close 2009) of  human complexities: immoral financial growth and cocreation of solutions

There are various types of economy as you may have gathered when you are a regular visitor to my blogs. We have the economies of:

All these economies are related to each other and fight a battle to sustain themselves in a financial world. They all have a product to sell and populate the left hand side of the picture below (financial leadership). They all have one thing in common: they want you! They want your attention, your money, your dependence and your votes.

Most of the world is active on the financial leadership side but depends of the side of sustainable leadership.

The other side of the picture is the transformation economy, the economy of change. This is a very special type of economy. It does not want to control you nor does it compete. It just wants health, harmony and sustainable development. It is automatically activated when things go wrong on the left hand side. It requires awareness, vision and a new sense of reality.

The left hand site just wants growth. A typical tendency is that growth shows health but also sickness through the appearance of intoxicating “antivalues”. These antivalues can be detected easily as we have learned by analysing human history and the history of societies. They have to do with greed, lust, power,etc. The antivalues are normally in the hands of powerful people and institutions who take benefit at the expense of others (deadly parasites) subtracting values from society rather than adding (hence the word “antivalue”) until a crisis puts them out of business and power.

Antivalues make the world sick and in crisis.

New values can cure us from the right hand side, which is always present and active yet not always noticeable. Those values need to grow in strength through applied change. This takes time but also needs space, strength and opportunity.

We only tend to want to cure ourselves only when we are really sick. Before that we behave as if illnesses do not exist. Prevention is not a democratic strength nor recognition of the signes of sickness. For many there are powerful reasons on the left hand side to ignore, neglect and even openly dispute antivalues out of self interest, opposing change with everything they can.

We are living in unique times. Antivalues in the past only seemed to affect our human communities. Now we realise that they also destroy our environment and human health. The transformation economy emerges with all kinds of corrective causes some of which are unique to the era we live in.

We call this the era of the Global Shift (Ervin Laszlo) or Quantum Leap (Jean-Paul Close). The changes that are demanded are of a more universal nature affecting human nature everywhere. It is only becoming visible now (unique antivalues such climate change and pollution) demanding the most intense changes ever.

The transformation economy emerges everywhere through a new type of leadership, Sustainable Leadership. It becomes not only visible (such as Sustainocracy), it provides also a new field of healthy interaction where institutions and societies of the left find their new growth inspiration and renewed strength. The changes that we can anticipate will be referred to in history as one of the most significant era in human evolution. As the left gets sicker the right grows stronger until it breaks through. Then a new economic health period emerges that cleans up the left for a new era of growth. Then it starts all over again.