When we refer to the column of values and the model for moral & material complexities we can have a look at two of the Middle East countries that go through specific crises: Egypt & Libya. They are both in chaos but in different phases.

Egypt: This is where it all started in the Middle East. The population had been suppressed for many decades and came to an uprise when the food prices rocketed sky high bringing poverty everywhere. The greed of the dictatorial leaders became a burden opening people’s minds to the immorality of their situation. Through internet and tourism the population had been able to see that their situation could improve by demanding a new society. Especially the youth has developed a global attitude that questions the situation they live in. They just needed a crisis to come to enlightenment and public action. 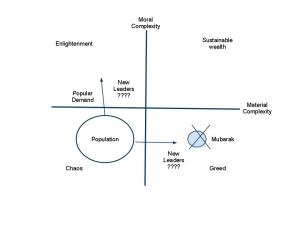 The Egyptian situation in March 2011

The huge difference between the exploitation of the countries wealth for the dictator and his clan and the increasing poverty of the community was enough to trigger the uprise and demand the departure of Mubarak.

The population is still in chaos with an important line of development along the line of morality  towards the field of enlightenment. But enlightenment does not mean welfare yet. The new leaders need to shape up and organize the country along the line of material complexities after the fall of Mubarak but within the context of high moral awareness. Many in command now however were also in command back then. Organizing a population along the lines of freedom, identity, democracy and sustainable progress after enlightenment is a very tough assignment which takes many years to achieve. It is much easier for the leaders to create a new dictatorship based on the example that they were part of before and the support they will encounter in certain areas of the current left overs of the old regime. With the promise of elections the leaders have time to build up the strength to make a fist against a new uprise. Even if elections are helt and a new leader is chozen to create a new Egypt of true sustainable and moral wealth this person will have a tremendous task to keep confidence and trust of the population and support of military structures while the country is being organized from scratch. Any logical minor mistake or political crisis in the process may set off a new series of power struggles anywhere in the country.

Which ever way, Egypt will remain unstable for some time to come but with a degree of general optimism and trust that they can all figure it out by them selves. The advantage of Egypt is that the population is relatively unified. Libya is a different ball game all together.

Libya: This country consists of a number of large ancient family tribes, one of which has been leading and suppressing the country for decades. This Khadaffi tribe is now being challenged for its dictatorship and greed as they control all mayor assets of the country. With the example of Egypt in mind the population started their own revolution but with a huge difference. The Khadaffi clan fights back with unjust power and financial backing from their assets. 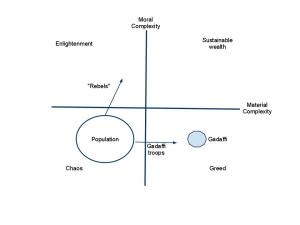 Libya ready to break up?

Just like Egypt the population is now in chaos. The initial material power of Khadaffi has been overrun by the NATO troops to allow the population a fair chance to combat each other with a level of material equality. The Khadaffi people want to get their control back over the country, not just out of greed but also out of tribal self preservation. If they loose they will probably be accused for the mishaps of decades by the other tribes and so is Khadaffi him self by international law.

The so called rebels want Khadaffi to give up and disappear. Their higher purpose units their tribal differences while Khadaffi remains seated. Now what will happen if Khadaffi is killed or disappears? Their current higher purpose has then been reached and a new one needs to be found. Suddenly the 6 mayor tribes in the country rediscover their original differences as they return to their ethnic identities. The Khadaffi clan has shown what it is like to boss over the rest. Surely one or more out of six would want to become the next ultimate leader. A severe risk of a civil tribal war looms. Splitting up the country into bits of pieces like Yugoslavia is not an option in this case. The Khadaffi clan can expect a lot of accumulated hatred from the others through decennia of inequality and distrust. But the other clans will also look at each other with distrust. A massacre is at risk.

The only chance that the Middle East has is to be found in the youngest generations. This population has created a meaningful enlightenment around the ancient tribal dogmas of their countries and the wealth, as well as mishaps of the Western so called democracies. These youngsters have had the courage for an uprise that their parents never had. They have the insight of global awareness to shape up a new society after learning from their own ancestors and those around the world. Will they be able to break through the hardline religious dogmatic leaders, their (often uneducated) parents and tribal differences to create a new, unprecedented basis for a sustainable, peaceful future?

Will human society yet again find its modern cradle in the Middle East?

The situation in Libya hence is extemely unstable no matter what the outcome will be of the internal struggles. To gain a basis for sustainable progress all the tribes will have to become enlightened with the desire to organize themselves around the higher purpose of a stable and wealthy Libya. They would have to get to a situation to accept each other as equals and form a coalition around this common goal. This is extremely difficult to do. Will the upcoming generations be powerful enough to make it happen and show the world an unprecedented example of human evolution around deep values?

My guess is that the entire region is going to be under new moral and material development over the coming decades with important periods of  dramatic ups and downs due to struggles between greed and morality, young and old generations. The effects of the long lasting unrest that infect also the surrounding regions will cause a faster evolution in other countries that depend on the fossil fuels that originate from the Middle East. This instability will affect countries with a strong oil dependence pushing them into fast investments for alternatives. Those will not be available over night causing those economies to enter into a transformative crisis too.

While the USA and Europe try to regain their old stability by pumping billions into banks and governments, without any desire to challenge that material dependence on speculation around money, and China develops its own forthcoming crisis due to its uncontrolled growth, the Middle East will be able to challenge everything and built a new culture that will eventually spread across the world when all the old material and capitalist structures collaps.

After the credit crisis this Middle East crisis may well become the second true world wide issue that drives economies down the drain triggered by the food and energy crises. Maybe this will become the ultimate challenge that gets the world to truly invest in the Global Shift or accept chaos to extend all over. The situation in Japan has also opened up the eyes of many and will help to get global leaders to accept that all human made structures around greed and material wealth are vulnerable and potentially a hazard for sustainable survival. A new world order around true values is needed. Will this be the moment? The war between human greed and moral enlightenment? What will win?