With thanks to Laszlo Zsolnai and Ove Jakobsen I was invited to participate in the publication of this valuable book published through Emerald Publishing. My contribution is about the Participation Society, an analysis of the evolution of our societal structures and the emergence of taking responsibility together as citizens and policy makers when dealing with our core human and natural values.

What started as a one man’s awareness breakthrough, that health and safety are natural core human values which stand above political, social and economic choices, evolved into an evolution of human societal development and multidisciplinary commitment to sustainable human development. Let us go through this step by step.

We all have a choice
We have a choice when awareness breaks through. When it does not then we remain trapped in a worldview imposed upon us by our reigning cultural surroudings and paradigm. It is as if nothing else exists or existed. The breakthrough opens our eyes to different realities and then the choice appears loud and clear. For me the choice was presented by life’s circumstances in two different occasions, the first in 1996, the second in 2003. The first time it affected me tremendously but did not pull me over the edge of making a definite choice, it just made me powerfully aware. The second time I made my definite and life changing choice.  I became my own first Sustainocrat in a new world.

We all have a choice between life and death

Our current social political – economical paradigm evolves around death
Our consumption based global and local economy is based on trade of dead things. In order to make a product we need to get our resources from the living world, kill it and convert it into a consumable. We have built large marketplaces called cities in which we display the dead stuff in abundance to give the population a permanent sense of abundance. We only see this abunbance but do not sense the destruction this killing does to our environment. The killing is not visible because it happens outside the city while the city itself has eliminated all lifeforms other than the consumption based interaction with the human species.

Exponential growth of the human population, combined with the focus on trade of dead materialism, caused an exponential growth of devastation of our natural living environment. And we all contribute to it through our labor activities and blind consumption, often unaware of our shared responsibility in the disappearance of life on Earth and eventually that of our own.

Transition from death to alive
The regions that gradually evolve into Sustainocracy through core values driven multidisciplinary cocreation platforms (such as AiREAS or FRE2SH or STIR Academy) have to go through an intense transition. This can only be done when the 4 pillars of the local community carry this responsibility together:

In order to help these fundamental pillars to interact on the basis of equality the tables are presided by an independent Sustainocrat. The sustainocrat makes sure the core values remain leading and that the multidisciplinary cocreation breaks through its abstract discussions and gets to project definitions and commitment of the diversity of resources with an expected result.

Both paradigms coexist and gradually the emphasys will transit from the money dependent trade and control system to the multidisciplinary cocreation. This coexistence is especially demanding for those executives in institutions that are active in both worlds. It becomes easier when Sustainocracy is seen as the regional process for value creation and the old system for value consumption. Looking for local cylcic balance between creation and consumption is a huge step forwards and produces measureable productivity, wellbeing and resilience. A new economic cycle appears…..

The problem, the consequences and the solution

Need I say more? It is in our self interest to do something about it. Consequence driven investments damage economies and societies while proactive attention may give an innovative boost that keeps us busy for centuries. The Dutch have experience since we suffered our own water catastrophy in 1953, killing 1500 people. The implications now would be devastating, affecting 47% of the country. Time to act?

The easiest way to “solve” this is to wait for the problem to pass by itself.

This is NOT the solution, despite being the easiest way to address the problem

This is NOT the solution either. Power abuse around money in fact stands solutions in the way.

The problem will indeed solve itself over time but scientists, economists and religious leaders now tend to agree that by that time there will be no human beings left to assume responsibility for our species.

10 years ago I stopped blaiming the world for unawareness and lack of sense of responsibility. For most individuals the issues are too abstract and mindblowing to picture  one’s own responsibility. Surrounded by definitions of economic patterns and efficiency tools I could not find any definition for sustainable human progress that I could relate to myself. So I created one.

Just try to adhere in commitment to this and things will change, for you and your surroundings

The commitment to myself and my natural surroundings evolved into the STIR Foundation, the cooperative venture AiREAS and FRE2SH and the STIR Academy for 21st century society and entrepreneurship. It changed my life and many others that got involved in these ventures. We can now involve the world by providing guidance, tools, inspiration and innovation. 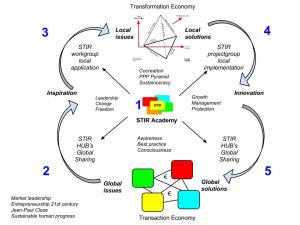 The STIR cycle for sustainable excellence and progress

Try it. It will change your lofe and that of your surroundings, always for the better.