The STIR Academy is entirely positioned in the world of Sustainocracy. What does this mean?

1. Invites rather than sells

The academy does not sell teaching programs. It invites people and organizations to take responsibility for sustainable human progress and take the learning from there as an investment into a new reality. This may start with a financial investment just to become aware of what it exactly means but as awareness evolves the investment transforms from financial to commitment in co-creation.

Our societies are very much concentrated on selling rather than taking human based responsibilities. When we are invited to take responsibility it is always related to a “change for progress” instead of “sales for progress”. The attitude, competences and commitment are totally different from the transaction environment.

Various co-creation structures to produce value are appearing in society. From an economic perspective (transaction economy) we see for instance Triple Helix (government, business and education) work together. From a societal human wealth perspective (transformation economy)  we see Sustainocracy (government, business. education and civilization). Multidisciplinary co-creation has very specific advantages over mono-disciplinary co-creation ( eg business + business, government + government). In such co-creation process all participants invest in the creation with means. This is not just money but also technology, authority, infrastructures, people, talents, etc.  And the groups can invest in knowledge and guidance in the processes of multidisciplinary co-creation. Then they take STIR Academy among the disciplines.

4.  Helps deal with the two worlds

In real life we deal with change to be able to grow. Both worlds interact. How to deal with both worlds effectively as a person or institution needs to be acknowledged, addressed, structured and implemented. Change and growth are incompatible together and yet form an unavoidable bondage. Dealing with both together requires entrepreneurship, no matter where it takes place and who deals with it. Any human being deals with this on a daily basis as a person but gets into difficulties when applying it to professional fragmentation and specializations in any sector.

STIR Academy helps with all four issues but does this from “the other side”.

You can see the STIR Academy as a self growing organism connected through sustainable human progress driven purpose (food, health, safety, applied knowledge, self sufficiency) and local Triple Helix and Sustainocratic venture development.

STIR Academy is a self growing structure around multidisciplinary co-creation

What makes a government “sustainocratic”?

A sustainocratic government is one that is willing to participate in purpose driven  local multi-disciplinary teams without any more authority than facilitating regional development of sustainable human progress. For many governments today this would mean an overall transformation by stepping  into the pack instead of the old dominant regulatory role. This transformation is necessary to pick up the challenges that human kind faces and that are shown through the appearance of all kinds of crises.

This is the comparison between traditional (current) and sustainocratic governance:

Transforming from one governance to the other needs others to become participatory too.

Most governments today are of the traditional type. In a money driven society the institutional interests have become so fragmented into isolated self-interests that all pieces of a society live a life of their own. This results local social consequences that need to be attended by the local governance in a reactive way. Local government uses taxation and debt to finance itself. Such governance feels powerful in its regulatory and controlling authority with a risk avoiding service to its population. This type of governance has become very vulnerable due to its disconnection from an evolutionary reality which develops beyond its control due to open borders and globalization of financial interests. Just the measures that fit the local consequences are within its span of control at the expense of its limited sources of financial income. This is explosively dangerous. Governance has nothing else to draw from then regulation, financing the growing consequence driven government dominated institutions (health care, police, expensive infrastructures, etc) through distribution and consumer growth while watching its society deteriorate.

In an open border, globalized world, such governments are vulnerable for any influences from elsewhere. Self interest does not lead to any partnership among governments as all search ways to keep up their necessary level of income at the expense of the others. Since local government income is dependent on levels of local consumption the stimulus is concentrated on keeping this in tact and growing, either through volume (automotive, food, energy, clothing, retail, logistics, etc) or through speculation (housing market, fashion, shortages in commodities, etc). This situation is unsustainable, resulting a ever growing public debt, internal instability, reduced government maneuverability, etc. Although powerful in regional regulatory dominance the governance has become ineffective, reactive and out of control. Such governance unavoidably leads to war and chaos, unless sustainocracy is applied.

The above suggests the urgent need of renovation of governance in an evolutionary sense. Sustainocracy is such next step in which regulatory dominance is transformed into facilitating partnerships through regional multi-disciplinary co-responsibility on human well-being issues. Key here is that governance assumes a territorial role of purpose driven technological and social innovation focused on sustainable local human progress instead of global competitiveness.

The most significant purpose of any community is to be as self sufficient as possible. Self sufficiency reduces the vulnerability due to the reduced dependence on others. Self sufficiency also requires the intense involvement of all local participants that shape and give content to the community. This is essentially what sustainocracy is all about: awareness, responsibility, participation and local wellness.

On paper this is easy to explain but how would one change a traditionally dominant regional governance into a facilitating sustainocratic partner? The logic maybe understood by local executives but the system is based on risk avoidance, regulation and control. Even if the executives wish to partner up in a sustainocratic processes they still face the need to involve their institutional structures too. Such structure is steered around the compliance of rules not bending the rules for progress. Executives run the risk of becoming non-compliant to their own systems of law. It is not simply a re-positioning of a business or letting a state go bankrupt. It means a totally new way of organizing society including jurisprudence. In a democratic society this can hardly be done because consensus is needed in a majority to make such drastic changes and such majority will never be found unless the society is in war or chaos already. Before that the conservative voices promising continuation of the past will always win from those who promise a better future.

Governance cannot transform organically from traditional to sustainocratic. It would have to take the seat in the center of a sustainocratic process, relinquishing all its dominance. That is impossible to conceive in today’s reality. When government is willing to step into the pack with its territorial responsibilities and commitment, the pack will need to step up to take co-responsibility too. In an environment where the other social components have been living an independent, individualistic, self interested life, this is a new complexity to deal with. None of these parties can take over because it would make them dominant in the relationship which is not logical either. Co-creation and sharing responsibility hence needs to be placed with the context of a new, modern cooperative entity. This entity is independent and represents the purpose of the venture. Various purpose driven entities can be established in this way uniting the influence and authority of the four pillars of society (government, business innovation, science/education and the local civil population) around a single complex purpose for local self-sufficiency.

In Holland I started sustainocratic ventures like that on a local for local basis. The first one is AiREAS, using air (environmental) quality measurements, related directly to human health, as trigger for social and demographic innovation. This is unique in the world. In the process of setting up this cooperative venture we needed to attend all the above transformative challenges. It is only succeeding because of the commitment of highly qualified people at the center with me and within the institutions that need to be involved. The intensity of the process from fragmentation to holistic cooperation is huge and vulnerable along the entire way because of the negative forces of individual institutional self interests fighting it continuously. It is a chicken and egg situation where partners are willing to join if governance is willing to step down and join the group based on equality rather than dominance. The only way governance can do that is by letting go of its financial control system over public means, providing cash to the sustainocratic venture with a demand (reciprocity) of shared result driven responsibilities.

Investing in change rather than maintenance

The financial commitment of using public funds from local taxes to invest in purpose driven ventures with the local population as beneficiary in wellness, is of course common sense. Yet traditional governance invests billions in maintaining an obsolete system, neglecting the building up of local for local self sufficiency. With only a fraction of all the investments that have disappeared into sustaining banks and bankrupt governments sustainocratic ventures would have already changed risk into sustainable local stability.

It is of course in the interest of a few people to keep a financial dominance out of self interest but common sense, and the availability of sustainocracy as new way of solving key human issues, will get a bottom up movement going starting primarily in the smaller urban centers where human interaction between institutional powers and civil entrepreneurship is still fairly close. State governance will change bottom up, peacefully if central governance is willing to let go of its financial dominance and dependencies, allowing things to happen for the sake of long term stability. Else populations will demand attention forcefully like they did in Egypt, Libya, etc. This is not necessarily done through acts of war or civil uproar. It can equally be done by demanding liabilities and responsibilities through the wisdom of the crowd and claiming constitutional human rights where they are being violated by money based governance that causes inequality, poverty, hunger and criminality. Social media are becoming a strong alliance of people demanding openness and transparency from governments. In many places in Europe and the rest of the world we see governments giving back regional development to their own people. In this peaceful process we observe that population can perfectly well carry the responsibility, especially when ventures are co-creative and partnered up by institutional interests together with creative local entrepreneurship focused on local wellness.

“Can do” needs the freedom of purpose driven ventures without the burden of old financial blockage. Taxation creates no value, creativity does, especially if directed at common human interests with involvement of all. 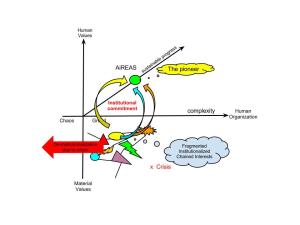