From Sept 21 -23 a group of academic and entrepreneurial visionary intellectuals from 14 countries met for the annual conference of EURO-SPES. The topic was “Spirituality & Sustainability” and the gathering took place in  Visegrad (Hungary), 40 km north of Budapest. Our organizing host was Prof. Laszlo Zsolnai. 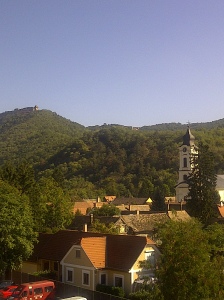 A beautiful weekend in a beautiful place full of history

Spirituality is a word that in the world of hard materialism is being neglected or despised as being soft or religious. This is a huge misconception and a true mental and practical blockage for development of true sustainable progress. Spirituality has various definitions as participating scientists correctly pointed out but the general description of the word is “the inner quest for the true meaning of our existence”. For people who live the simplified life of materialism such quest is of course a scary confrontation with their own consciousness and certainly something to be avoided. The world of the “having” is exactly opposite of the world of the “being”. Both reject each other like poles of a magnet. The transit from a “having” kind of mentality to one in search for identity (being) is usually referred to as a “crisis”. The process is one of letting go (voluntarily or involuntarily)  of material securities and trying to find comfort in the new world of inner feelings and meaning.

In such open field of emotions people start reacting in many ways, some aggressive or depressed, others become artists or find unprecedented hidden forces of leadership. During the conference we were enlightened with views in each of these fields of expertise. Academic research is showing the importance of spirituality for humankind to recover from crises and develop sustainable evolutionary progress through the renewal of true meaning. It represents a combination of rationalization of inner search for meaning and putting the growing awareness into practice in experiments around new ways of organizing ourselves, individually and as a community. This is called the pre-paradigm, a phase before, after or within crises, in which alternatives develop to a reigning paradigm that is falling apart. Such pre-paradigms are always confrontational to the one that is being disputed. A pre-paradigm uses the logic of spiritual consciousness and is usually neglected and even denied by those who are unaware, or intentional to uphold the existing paradigm out of personal or institutional interests. The old paradigm has lawful support while the new paradigm has the power of timeless meaningfulness.

It was shown that such human evolutionary patterns of obsolete but reigning paradigm, crisis, pre-paradigm development through spirituality, and the opposition between old and new paradigm, are a natural evolutionary phenomena of a self-aware species. Even the dramatic consequences of a powerful yet obsolete paradigm, that could cause death and destruction, can be seen as a universal natural disaster hitting humankind, forcing ourselves to renew our spiritual awareness and develop a new evolutionary cycle. But this natural phenomena is of course not an excuse for those who are aware of it to let it happen just like that. The force of reasoning and new paradigm development is nowadays, thanks to many modern elements of peaceful reflection, education and opposition, capable of overcoming a forthcoming crisis without the natural need for or potential threat of a mass destruction.

Academic intellectuals, artists and entrepreneurs from 14 countries meet for the paradigm shift

Sustainability was explained from an existential and practical point of view, using also nature as a point of inspirational reference. Various presentations coincided about the forthcoming mayor crash, a melt down of the world order of economics after decades of exponential growth and speculation. For the first time academic financial specialists looked at the broader picture and showed the unsustainable truth of current economic materialism. Not many presentations could pinpoint yet a solution. Some were still tempted to use economic instruments that were contrasted by others, including me, as “decades too late” and at this stage unrealistic and equally obsolete.

Solutions needed to be found in the inner world of reflection, awareness and consciousness, not the external worlds of old material securities. My own practical presentation of sustainocracy was well received. As I was one of the very first to present my case I had three more days left to get some deepening reflection about it with those who connected with the complexity of my line of thinking and my practical proof of concept that already went beyond the phase of pre-paradigm. During the questioning rounds after each presentation the power of my own model of human complexities proved its worth for my own inner guidance for reflection and interaction with the others. 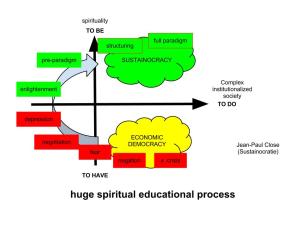 The complexity of the current global situation was also beautifully shown through expressions of art around the world, presented by academic scientists, and available to create awareness in a difficult world of opposition, apathy, ignorance, commercial over-communication, fear and manipulation. The surprising beauty or challenging intellectual creativity brought forward in all kinds of artistic disciplines was mind blowing. Speakers could pinpoint  where the problems were in the unbelievable massiveness of humankind in the world today, but also that solutions were not easily at hand. Humankind was expecting solutions from the external material world while all agreed that the real solutions needed to be found in the inner world of meaning through spirituality and structural renewal of our civilization’s organization around life and evolutionary essentials.

Many presentations therefor referred to the necessary inner quest for reason and meaning, not just as an individual but also as an organization and entire civilization. Many also referred to the powerful explosive potential that spirituality has when it hits the individual and the masses. “Water must flow freely” (biologist and journalist) Janos Vargha stated when he explained his decades of battle against the system of political and economic madness when the Danube was nearly doomed for exploitation with damaging effects beyond repair. He won! 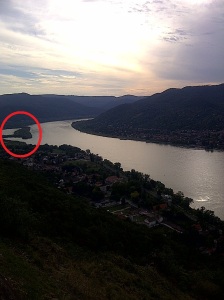 In the red circle the “monster of the Danube”, artificial remains of human institutionalized madness

And so will spirituality as this too must flow freely. The dam that was going to affect natural life, including human’s, in and around the Danube, is now a metaphor for the blocking forces of artificial institutionalized economic and political interests that stand free flow of awareness and reason in the way. Public opposition builds up powerfully and eventually breaks through the dam with force. Right now we are all like Janos in the 80’s, claiming the free flow of meaningful reason and renewal in a peaceful but demanding way, before damage is irreparable. We have time at our side, those who try to uphold their unsustainable power position do not. This personal reflection should give us trust, no matter what happens:

“Spiritual meaning will eventually win as it always has, simply because it has eternity on its side while the temporary power of the self proclaimed mighty dies with those mortals that try to uphold it in their lifetime”.

The encounter was very powerful indeed and finalized with people who found each other in meaning, reasoning and purpose. Friendships were born, alliances too, and solutions were shared that went beyond the stage of experimental pre-paradigm. During that weekend in Visegrad along the Danube bend of Hungary the cultivators of a new human future shared seeds to sow across the world. The new paradigm of sustainable human progress exists and will grow there where true spirituality meets with purpose driven leadership and entrepreneurship.