Home » Society » Our waste, his bike

Our waste, his bike

Have a look at this guy on his bike 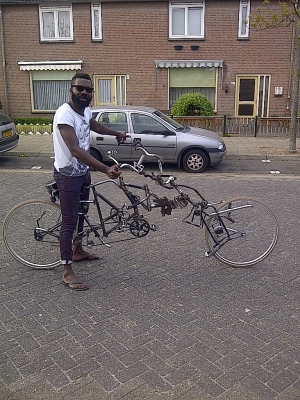 This is probably the most curious bike you have ever seen. I had seen the chap biking through our neighborhood but never got the chance to talk to him. The bike had always caught my attention. Also the local children, including my own, had referred to this “funny and strange man with his bike”.

Today he stood in the street and I asked him how on Earth he could have made that thing? His answer was quite clear and inspiring. He found so much junk thrown away by people that he collected it and made objects out of it. Giving it a second life. This bike was entire made out of scrap materials that he had found thrown around.

In reality the bike was a remarkable demonstration of our waste culture which everyone complains about, no one ever seems to have contributed to and meanwhile is piling up in every corner of our environment. The bike was showing our polluting lifestyle and this man had made a rolling confrontation with our mentality.A genius!

He caught my respect and I asked him if I could take a picture? His name is Victor Sonna and originates from Cameroon. After finishing Design Academy in Eindhoven (Netherlands) he decided to stay and develop his talent further. On his website I found his personal story:

“As a child, I had worn-down slippers for shoes. Not daring to show the holes in them to my mother, I remade these slippers into a boat, a car or an island. I invented a new context for each particular slipper, giving it a new identity. Reality and image got blurred. For me, an attribute doesn’t necessarily carry the meaning given to it by its context. Instead, an attribute ‘challenges’ me into stripping it from its obvious contextual meaning and giving it a new significance.

The transformative and regenerative power of destruction is my incentive to shake and stir up people’s minds. I do so by alienating them from their set ways and patterns and confronting them with the consequences of their actions. We need contrast, otherwise everything would be invisible. I deliberately blur the edges of my use and non-use of materials, making them flow into one another. That way, my materials and ideas get to play a new role and acquire a meaning that can be different from one person to the next!”

I can’t wait to meet him again and invite him to work together in one way or another, stirring up the mind of people and showing them that everything can be seen in various ways. Watching him on his bike and knowing now who he is and what he stands for shows how remarkable the world is if we care to open our mind to it.

By Jean-Paul Close in Society on May 3, 2013.
← I have died twice already and resurrected Secrets of life →