During the battle of the dinosaurs do not forget the butterflies

In the media and our own minds we pay too much attention to the battle of the dinosaurs but we forget the dominant leadership of the insects.

With this metaphor I try to open up our minds to the different realities that work in our own human “universe” of interactive values. Much of our attention (and fears) goes to the noisy battle of the giants (banks, big continental governments, large enterprises, etc). During the credit crisis the focus was on the over-sized banks that had started to take unprecedented risks to feed their hunger for growth and profit. We now get constant feedback on the economic power development of dinosaur China, the threat of Russia, the indexation of the stock markets, etc. We observe the global battle around fossil energy while territorial and financial dominance is being played in noisy way everywhere. The giants show the teeth, bark and move their muscles. They turn around each other and make aggressive moves. And we all watch as if were depending on the outcome. But we are not. 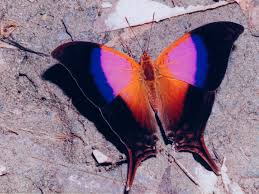 Despite the destructive forces of these monstrous battles we forget the insects. This part of the metaphor is as a natural reference to the creative and adaptive force of the enormous diversity of selfaware human individuals. When we take a closer look at humankind we see that at micro level the human world is changing as the dead dinosaur bodies pile up. When food prices doubled the Egyptians stood up as a swarm of wasps against their own dinosaur Mubarak. They won the temporary battle just to see new dinosaurs take power again. But what is done once is done again and again. The rule of nature is that the big only keep stable if in harmony with the small. When the balance is damaged the big will fight to avoid collapse but the small always wins. The real dinosaurs became extinct a long time ago. Now humankind build artificial ones of our own. Harmony is damaged because the big and powerful became arrogant and dominant, using the small rather than serving the balance. These artificial dinosaurs face extinction once again. They dissolve, leaving groups of individuals to find back their own colorful identify and freedom.

Within the enormous diversity of world of insects butterflies are a beautiful comparison to our own human diversity of awareness and behavioral coloring. We also see human beings go through the phases of development to eventual spread their own colorful wings of diversity. We avoid competition by evolving into the vast diversity of diversification through applied awareness. Finding like minded individuals we create stable communities with new system’s complexities that have a more sustainable nature than the dinosaurs, until they become the dinosaurs of the future again.

The battle of the dinosaurs takes our attention away from the beauty of the small world of our own butterflies. The world of sustainable human progress is not at the level of the powerful in battle of survival but with the adaptive, peacefully showing off our unique diversity in a changing world

What is it that individual human beings have (like insects and butterflies) that the dinosaurs (old systems) miss? Let us sum it up in large lines:

1. We need very little to survive compared to the big monsters.

2. Human beings can live, adapt and survive in real natural life while the monsters need to mix the virtual reality (money) with real (commodities) in a static robotic structure.

3. Humans display a large diversity of individual creative expressionism to solve the most complex issues. The monsters can only enlarge solutions, not create them. Some people already refer to the “failure of robotics”. I refer to the “redesign of system’s complexities”

4. Human beings are flexible due to their relative small size and freedom of choice.

6. Old sick human made system’s dinosaurs are made up of the commitment of the sum of humans. If this commitment disappears the system dies. No artificial laws, rules or slavery can hold it together for long.

7. The human being is nature and so are our systems. Laws of nature apply with which humankind can relate through empathy. When empathy disappears so does life. The system becomes a robot, not a community. Only communities last in nature.

Want to find your own butterfly. Join our summer course “the breakthrough of empathy”

By Jean-Paul Close in multidimensional world, Society, Sustainocracy on May 3, 2014.
← Shut up, I am busy My open invitation to Pope Francis →