Home » multidimensional world » There is no leadership in world economics

There is no leadership in world economics

Much is being discussed these decades about world leadership with respect to global issues. Often fingers point at Obama, Putin, the United Nations, the G20, G7 or the IMF. In reality these people and groups display hardly any leadership, just management. In the world of economy there is no leadership, even though we really need it if we want to face the real issues of concern.

More importantly, considering that this “world leadership” emerged from the ashes of world war II, we can state that the lack of leadership of these groups and individuals actually cause all the world problems. Within the context of world powers and economics they all compete using the rules of economic management to compete efficiently. Their financial interests used to be focused on trade only. In a consumer economic scenario the issue now is also on consumption. Most consumption is energy (oil) based which means that much of the management of relationships and confrontations deal with energy and trade issues.

There is a general lack of understanding of the difference between “management” and “leadership”. This is why we tend to point erroneously at these “world managers” for solutions around the other issues (global warming, pollution, migration, rising sea levels, etc). We forget that these are caused by the trade development, usage of resources and usage of energy around which economies are built. If such world managers of economic interests are to lead the solutions they would have to step over their managerial tasks and economics in the first place. That is not their mission (yet). There is hence no leadership in economics, certainly not in world economics, just management. To solve this we need two things: understand the difference and introduce leadership.

What is the difference between management and leadership?

Management: The control over fixed process patterns with an objective of growth, improvement and optimization. (more of the same, better)

Leadership: The initiation of totally new initiatives and processes based on vision or need. (change, different)

The Prime Minister Mark Rutte of the Netherlands recently remarked that he was governing without vision because “vision costs money”. Politics and government, in a world reigned by financial dependencies, reason from fixed economic patterns that consist of rules, financial relationships and money dependencies. Managing the complexity is difficult enough because of all the interconnected economic strings. When we introduce the leadership issue of “change” the total system’s balance can get disturbed. No PM or President, unless post war (or in chaos), dares to introduce change, preferring to let chaos arise rather than being the cause of it. Prevention of chaos is impossible to explain in a democracy. People would not understand as change also affects them. That is why you see a management culture of fear in every economy, business or government, preferring resistance and even opposition to change. Conservative economic forces see leadership as a threat.

Management is wrongly characterized as “realism” because it deals with known patterns that can be explained and forecast by analyzing the past.

Leadership is wrongly seen as “idealism” because it addresses change through ideals, with passion and vision from which there is no proof other than common sense or non economic logic.

This all has to do with the history of economics that developed from instrument to goal, allowing room for real leadership only after collapse. This needs to change.

Leadership comes traditionally after chaos (collapse) , when management is forced to let go

Economy is cold, deprived of moral and sense of holistic reality because of concept of “money” as a goal of growth. The real reality has nothing to do with the fake materialism. It has to do with sustainable human progress. The consequences of lack of (or room for) leadership is building up to reproachable levels and proportions that reaches a point of “criminal against humankind”.  Policy people who recognize their responsibility but impotence to perform leadership tasks within the economic management system have the tendency to quit their position. When they leave there is a self regulation within the system to keep robot like people without moral scrupulous. We cannot call those leaders.

STIR offers an unprecedented solution for the world problems but also for these top executive world managers with leadership ambitions. STIR introduces a global shift where chaos is avoided by accepting leadership as equal part of the (holistic) picture.

The holistic society has very different characteristics than any society before

STIR asks the self aware governance people (in business and government) not to throw in the towel but to stay and connect instead to STIR leadership activities of the City of Tomorrow. They can use their authority within the system and use their position to provoke changes that are being caused by introducing the “STIR loop”.  The leadership of STIR is not personal but driven by the global issues of the times we live in (such as food scarcity and manipulation, health damage due to pollution, security issues due to lack of awareness and attention, blindness of the masses, lack of self reflection and self sufficiency in money driven democracies), picked up from a local perspective.

By addressing the global issues locally we co-create and share leadership steps that feed management with well sustained innovations, challenging policy to change too. There is no need for fear, aggression or chaos for this leadership to manifest itself, just a conscience and the willingness to work together with other local players.  This picture clarifies what we call “the transformation economy of 1%” (1% change (leadership), 100% growth (management), 200% effort (both): 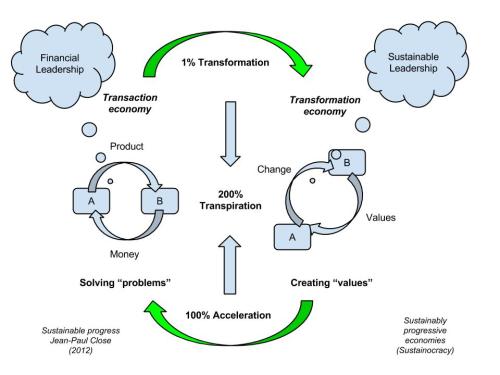 It is not dangerous or risky and changes old managerial culpability into involvement where the hierarchical leaders themselves decide how far they can go in their institutional structures.

In Eindhoven (Netherlands) we initiated such process in experimental way, inviting policy makers, directors and scientists to the independent table of Sustainocracy. A lot of energy went into convincing these managerial top people with “attitude” to step into the group for leadership around key issues. It was tough because of the tradition of power of dominant authority and the initial reluctance of these people to participate in external leadership processes that expect them to commit with rebound to their own position. It is hence a challenge on its own to find, invite and involve the right people. They tend to be “special” and “extraordinary”.

When they accept the process and go through it individually, collectively and institutionally it is up to STIR to capture and contain the values achieved, including the learning process. We need to support these people who go from their leadership at STIR back into their management position and structure.

The precedents are now also available as so called “holistic learning programs” of the STIR Academy. We offer holistic education (higher than university), specialized study programs (eg healthy city, self sufficient region, etc) at university level and practical programs at high school level. Working together with partners from scientific and high school education, as well as training or coaching, we also offer the world of business, government, knowledge institutions, semi-governance, but also individuals with leadership interests, the possibility to get involved and learn the earlier the better out of self interest. No one will escape from the leadership requirements in the world and will be confronted, no matter what, sooner or later. Life can be made so much easier , significant and purposeful when leadership is learned to be dealt with as a natural part of sustainable human progress, in harmony with management, not neglected.