Our civilian sustainocratic initiative AiREAS designed its own low cost real time city measurement network for registering and displaying air quality in near real time. We use state of the art technology, scientific modelling insights, etc. and measure ultrafine particles (UFP or PM0.1) that are smaller than a virus, PM1, PM2.5, PM10, ozon, temperature, SO2, etc. Our network was installed and calibrated in December 2013. Since then we collect and store valuable data.

Making the invisible visible from an air quality point of view is necessary in our multidisciplinary attempt to co-create a healthy city. Having the data is one, interpreting them is a totally different story as this unexpected event will show.

Unexpected peak
One of our partners, Imtech, in charge of data storage and ICT, is experimenting with data display on mobile telephones. I have the test app now on my phone to do some early fieldtesting. Another partner, ECN, in charge of the equipment development, has an internal display tool for testing and benchmarking purposes. This tool I use too to compare app and network data when necessary.

Every day I look at the status of the city. On the app I generally see the network as a bunch of green balls. They change color when the norm is reached (orange) or passed (red). On the computerbased tool I can see more detail and summary over time. There I often detect sudden peaks that come and go fast.

On the monday morning of Juli 21st I looked again on my app. The traditional boring green balls were all flashing red and orange. Here I display what I saw that morning: 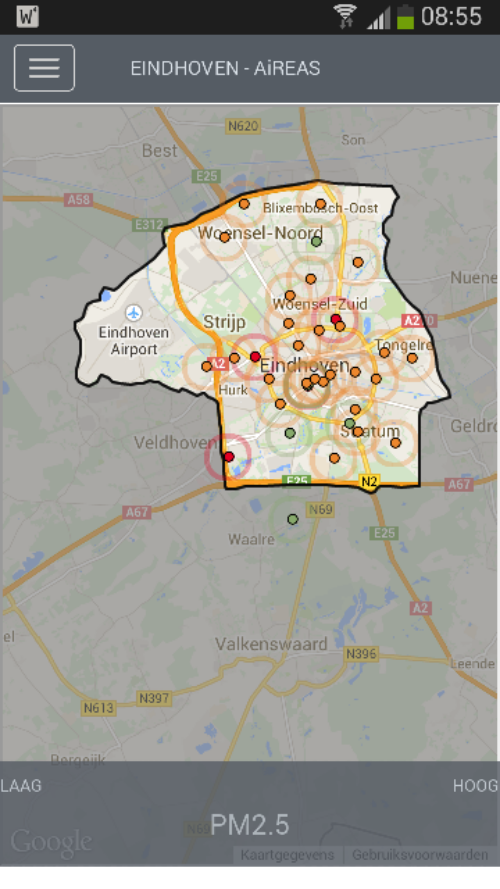 It immediately triggered my interest. What could cause such sudden city pollution, particularly in the field of PM2.5? The other measurements did not show the same peaks.

I contacted ECN and they not only confirmed what I saw, they added that the peak had been gradually building up from midnight onwards! That was strange. We expect traffic related peaks but not a nighttime buildup when the city is expected to be at rest. Was there a fire somewhere? Quick research revealed that no special events were reported. 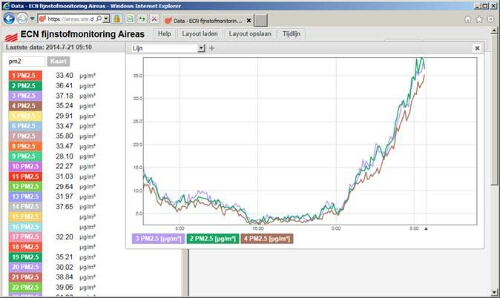 The sunday before had been a nice, warm summer day. The evening was warm, humid and windstill. Many people were still in town as their holidays would begin a week later. Reports from our civilian network spread over town added two issues to be considered:

That night a fog had been building up over town from midnight onwards and slowly disappeared around 10 am that monday morning. The pollution peak had coincided with the fog, not the human BBQ activities. We were puzzled.

Someone suggested that our network was measuring water droplets as if it were finedust. That plausible idea could be eliminated because we use drying techniques before counting the particles and other foggy days had never shown such peaks. And water does not necessarily produce respiratory discomfort.

The local hospital also entered the debate. The hospital has operation chambres where also meat is burned, for instance to close wounds. CO2 concentrations in the OCs at one time had been high causing people to loose concentration and complain of fatigue. There is a natural relationship between healthy air and the number of ions in it. Ionizing the space helped overcome this problem. Then a new problem occured. Personnel had complained of nausea after closing wounds with burning techniques. Research showed that a specific combination of air moisture, ions and gases from burned meat caused chemical reactions that produced the sickness.

The question now arose if this could have occurred in the public space? The theory now is that on that sunday evening people massively BBQed in Eindhoven. The city is geographically located in a shallow dip. The bbq fumes accumulated in the city and were not dispersed due to the lack of wind. The high humidity caused fog to develop from midnight onwards. The water condenses on the finedust producing chemical reactions with the gases from the burned meat. Sensitive people who inhaled this experienced breathing problems, sickness and a sleepless night. At 10 am the problem disappeared as the fog lifted.

Conclusion
The explanation seems plausible as it could be contrasted with the experiences in the hospital that had been researched. Some AiREAS partners have promised to try to simulate the event in a lab environment to confirm the analysis or offer new insight. From a healthy city point of view we feel motivated to introduce bbq alternatives and innovations in town. We also have a new impuls to see if in wintertime similar situations occur when burning wood in stoves for heating. What does this do during foggy days?

All people involved were impressed with the multidisciplinary interaction to come to a plausible explanation. Many people were triggered positively to participate in the debate. It has not ended yet of course but the curiosity has pinpointed us to an issues that we can solve ourselves as citizens through awareness and innovative response.

AiREAS is creating Local AiREAS initiatives throughout Europe now. Maybe we can share experiences both in the field of public space as special environments s.a. hospitals.